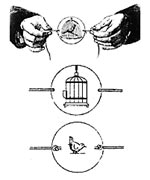 The Origins of 'Persistence of Vision' or 'Retention of Image' - the phenomena which, it is often noted can be used to explain how motion pictures work - can be traced back to experiments by Newton, but it became firmly established by Belgian scientist Joseph Plateau in 1829.

The early Scientific Toys which provided animated scenes, through to modern cinema all rely upon Persistence of Vision to achieve their aim of fooling the brain into believing what it is understanding is moving rather than a series of still images.

The first of such toys was the 'Thaumatrope' - a small disc held by pieces of string. One either side of the disc was drawn and image which seemed to superimpose onto each other when the disc was spun. The invention of this device is often credited to astronomer Sir John Herschel but it was well known London Physicist Dr. Paris who made it popular.

Examples of the kind of images used on the thaumotrope include a tree with bare branches and on the reverse, its foliage - when spun the tree appeared to be full of leaves; or a bird and a cage - in this instance the bird appeared to be caged when the disc was spun.

Another device which illustrated this principle was Michael Faraday’s Wheel - which consisted of two matching wheels on the same axis with spokes around the perimeter. When spun together in alternate directions the wheel further away appeared to move slower or often stop when viewed through the closer wheel.

Belgian physicist Joseph Antoine Ferdinand Plateau, inspired by the work of Faraday and Peter Mark Roget (Compiled of the Thesaurus) developed these ideas further and adapted the wheel into a toy. This involved two discs mounted on the same axis, the first disc had slots around the edge and the second had drawings with successive action.

When spun and viewed in a mirror through the slots the pictures remained the in the position but the figure gave the impression of movement.

This device was given the name Phenakistoscope although it received other names when marketed including the Phantasmascope and the Fantoscope. 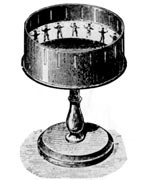 In 1834, William George Horner proposed a more convenient device based on Plateau’s Phenakistoscope which eliminated the need for a mirror and allowed several people to view the device at one time.

Horner’s idea was to take shape in the form of drum with an open top into which was placed a hand drawn sequence of pictures on a strip of paper. The pictures were placed around the inside of the edge of the drum and could be viewed through slots in the outside of the drum.

The images gave the illusion of movement as the drum was spun. Horner referred to his device as his Daedalum. Strangely the Dadalum was almost forgotten for over thirty years until 1887, at which point it was patented almost simultaneously by William F. Lincoln in America who gave it the name Zoetrope, and in England by M. Bradley.

Thoughts on the Zoetrope