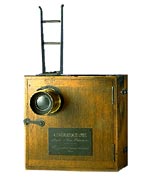 It was Louis and Auguste’s father Antoine who sparked a moving picture interest in sons after seeing Edison’s Kinetoscope and with the Lumière Factory behind them (which manufactured photographic goods) the brothers set to work designing a camera and projector.

The first experiments carried out by the Lumière Brothers were based around the intermittent mechanism used in sewing machines.

On February 13 1895, Louis and Auguste patented the name Cinématographe in both their names.

Their Cinématographe combined a camera for recording the movement, a printer and, when connected to a magic lantern, a projector. About the same size of an ordinary hand held still camera, the Cinématographe differed from the Kinetoscope in many ways - notably in its size and weight.

The Kinetograph - Edison’s camera - was confined, in general, to the 'Black Maria' Studio in Edison’s Laboratory grounds; in contrast the Cinématographe had no such constraints and could be taken almost anywhere thanks to its lightweight design. In addition was its method of presentation and the combination of all the basic elements needed to record and project motion pictures in one box.

Like Edison the Lumières used 35mm film but unlike Edison opted for a film speed of 16 fps as opposed to the 46 fps chosen by Edison.

In addition, the Lumières were quick to patent their Cinématographe abroad (Edison’s failure to do so in Britain had led to copies made by Robert Paul).

To promote their new invention Auguste planned a clever publicity programme of several private screenings which generated much public interest and speculation before the official unveiling on December 28th 1895 at the Grand Cafe on Paris's Boulevard Des Capucines.

Thoughts on the Cinématographe