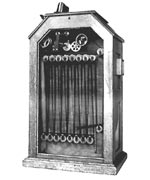 The finished 'Kinetoscope' could, if Edison’s original vision had prevailed, turned out quite different.

Employing W.K.L Dickson in the Spring of 1883, Edison soon noted his enthusiasm and value and made him his assistant. Five years later in 1888, inspired by his Photograph, Edison set Dickson to work on developing, “...an instrument which does for the Eye what the Phonograph has done for the Ear, which is the recording and reproduction of things in motion....”

Early experiments were tried using ideas developed from the phonograph - a cylinder based device onto which a series of microphotographs would be arranged in a spiral formation - like the recorded tracks in the tinfoil of a phonograph.

Edison envisaged projection to be achieved by shining a light source through the microphotographs from inside the cylinder.

In the October of 1888 when Edison’s first patent was filed, several names were discussed including the Kinesigraph and the Mutograph with Edison eventually settling for the Kinetoscope.

Dickson, it seems did the majority of the work on the Kinetoscope and by early 1889 work was clearly moving along. Refinements to the original description were made regarding the addressing of the intermittent motion problem.

The photographic medium for presenting the microphotographs, had also required serious thought. Experimentation with coating the cylinder with photographic emulsion was considered but deemed impractical.

A breakthrough came with the launch of photographic quality celluloid by John Carbutt. In June of 1889 the Edison Laboratory ordered 12 Carbutt film sheets - each sheet measuring twenty by fifty inches.

After much experimentation the cylinder device was clearly at a dead end and with the results produced proving successful but highly impractical, Dickson and Edison turned their attention to film.

The initial prototype was actually a 'taking device' - camera, but could be converted to a projector by shining a light through the film and lens. In a demonstration to a Convention of the National Federation of Women’s Clubs, invited by Mrs Edison, the audience members in turn could view the moving pictures through the aperture where the lens had been.1

The Kinetoscope mechanism was driven by an electric motor. The peephole version which is recognised as “The Kinetoscope” was ready in prototype form at the end of the Summer, 1892. It comprised and upright wooden cabinet, four foot high with a peephole in the top. Magnifying lenses in the peephole enlarged the film - a continuous band around fifty foot long which was arranged around a series of spools.

The film was transported round the Kinetoscope by an electrically driven sprocket wheel at the top of the box which engaged corresponding sprocket holes in the 35mm film. Illuminating the film was an electric lamp which was separated by a shutter providing intermittent light illuminating each frame in turn and producing a moving image.

Thoughts on the Kinetoscope