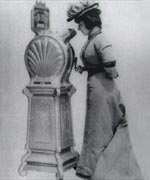 During his time at Edison, W.K.L Dickson, it seems, had close association with 'rival' inventors which included the Lathams and Henry Norton Marvin.

It was to the latter that, it was alleged, Dickson offered advice concerning a simple alternative to the Kinetoscope.

With his partner, Herman Casler, Marvin took Dickson's proposal - an elaboration of the flick-book principle - and set to work. Together they worked on their device which was perfected and patented with the name Mutoscope by Casler on November 21st 1894.

Expanding on the flick-book principle, the Mutoscope contained a sequence of photographs which were arranged around the perimeter of a drum. A simple turn of a handle flipped the cards rapidly, giving the impression of movement.

The Mutoscope was, like the Kinetoscope, a Peepshow device and included a viewing aperture which customers peered into to watch the action. Unlike the Kinetoscope the Mutoscope didn’t rely on any special illumination or an electric motor and gave viewers much greater control over the viewing - for example they could control the speed at which the action took place or turning the handle in the reverse direction produced backward motion.

Casler had perfected a camera for the Mutoscope to produce films and was in operation by early June of 1895 with some of the first films, it is believed, taken by Dickson. The camera was named the Biograph.

In November 1895 the Mutoscope was adapted with a mirror device, the result was projected motion pictures from a Mutoscope. It wasn’t long before Casler and his partners perfected a through-the-film projector which took the name Biograph.

The partnership of Dickson, Marvin, Casler and Elias Koopman led to the formation of the American Mutoscope Company on December 27th 1895.

Thoughts on the Mutoscope