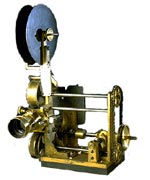 In March of 1895, Charles Francis Jenkins, a young government clerk in Washington entered into an agreement with Thomas Armat, a fellow student a the Bliss School of Electricity. Their aim was to develop a motion picture device.

Jenkins had already invented a device for viewing motion pictures which he called the Phantoscope, a variant on the Edison Kinetoscope. With this experience the two were able to work quickly and by 28 May 1895 the two had developed a projecting version of the Phantoscope and applied for its patent.

That September, the two travelled to Atlanta with their invention and gave a public demonstration at the Cotton States Exposition. Although no evidence remains regarding the quality of their projections or the success of the show, one can guess that it was well received as shortly after this event the partnership broke up with each party claiming the invention to be their own work.

After the split the two worked independently on improving the Phantoscope. Jenkins had his version of the projecting Phantoscope ready by the first week in November 1895 making the first public demonstration on December 12 at the Franklin Institute in Philadelphia.

At the same time, Armat, upon perfecting his version, approached prominent entrepreneurs Raff and Gammon who were excited by what they saw and approached Edison with the intention that he develop the machine.

Edison agreed and in February 1896 the Armat projecting Phantoscope was renamed the Vitascope and was preceded by 'Edison’s' for, as Raff and Gammon explained, effective publicity and exploitation of the device.

The first theatrical exhibition took place on April 23 1896 at Koster and Bial’s Music Hall in Herald Square, New York City. The film that made the greatest impression on the audience that day was Robert Paul and Birt Acres' 'Rough Sea at Dover'.

Thoughts on the Vitascope