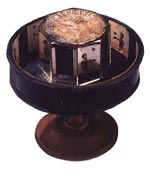 The combination of moving picture 'toys' and vaudeville exhibition devices such as the magic lantern was inevitable and one of the first successful attempts at such a marriage came in the form of the Praxinoscope.

Using a drum design which revolved, as with the Zoetrope, the images were viewed reflected in a prism of mirrors which rose from the centre of the drum. Each mirror as it passed flashed a clear image opposed to it.

The result was perfect animation without the loss of luminosity in movement which was experienced with the Zoetrope.

The next step, as Reynaud saw it, was to adapt his existing device so that the animated pictures could be projected. The replacement of the opaque drawings with transparent drawings meant that light could be shone through them. The light which shone through the pictures was reflected by the mirror prism and focused onto a screen through a lens.

In 1872 Reynaud took this idea and turned it into theatrical entertainment. Up until this point animation toys had been limited to repetitive images. Reynaud noted this and devised a method of painting a series of pictures on small glass plates which were joined together in a single flexible strip. The animated characters were projected onto a screen from behind.

The effect he achieved was successful but was jerky and slow. In addition the labour required to draw the strips meant that Reynaud’s films could not easily be reproduced.

Reynaud’s Theatre Optique came remarkably close to the cinema - all that it lacked was the addition of photography.