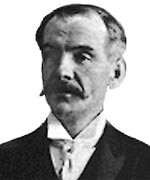 Birt Acres was born in Richmond Virginia in the USA in 1854 and became and orphan at the age of fourteen during the American civil war and was taken in by his aunt who became his guardian.

Around 1872 Acres was sent by his aunt to Paris to complete his education at the Sorbonne where he studied Fine Arts, and, one would imagine, photography.

Acres returned to the United States four years later to lead the life of a Frontiersman and it during a period of eight or nine years became quite wealthy and around 1885 moved to England where he married a Tazmanian girl.

Once settled in England, he set up a studio for the 'production of portraits by painting and photography', in the seaside resort of Ilfracombe in Devon. It wasn’t long before Acres had gained a good reputation as a successful photographer, lecturer and contributor to photographic journals. In addition he worked as an inventor and patented apparatus for washing prints and copying stereoscopic photographs.

In 1893 Acres joined Elliot and Sons - leading manufacturers of photographic plates and printing paper and in the same year patenting an appartus for 'exposing successive photographic plates and for exhbiting magic lantern and other slides'. Around the end of 1894 Acres was introduced to electrical engineer, Robert W. Paul by his friend Henry W. Short. At this time Paul was in the process of manufacturing copies of Edison’s Kinetoscope and was anxious to construct a camera with which to produce films to show on his machines.

Around the end of 1894 Acres was introduced to electrical engineer, Robert W. Paul by his friend Henry W. Short. At this time Paul was in the process of manufacturing copies of Edison’s Kinetoscope and was anxious to construct a camera with which to produce films to show on his machines.

The pair worked together on the camera at Paul’s Hatton Garden address with Acres providing the initial designs. When they had constructed the camera, Acres used it to make the first successful film in Britain - Incident at Clovelly Cottage outside his London home in Barnet in March 1895.

It was at this point where the two entered into partnership with a ten year business agreement. This agreement lasted only six weeks before the two split. During their brief partnership, the two shot films of the Oxford and Cambridge Boat Race in April and the Derby in May.

The precise reason for the parting is not known but it is widely held that Paul was angry because Acres had patented his Kinetic camera - almost identical to the one they had developed together - in his own name.

Following the rift, Acres travelled to Germany with his Kinetic camera and filmed the opening of the Kiel canal and made a film of the Kaiser in June 1895.One his return to Britain Acres began work on a projector to accompany his Kinetic camera - the resulting projector became known as the Kinetic Lantern, Kineopticon and the Cinematoscope.

Acres gave the first public performance of his projector at the Royal Photographic Society, where Acres was a fellow, in London on 14th January 1896 - five weeks before the screening of Lumière’s Cinématographe and Paul’s Theatograph.

Also in January, Acres formed his own company - the Northern Photographic Works which specialised in coating, perforating and processing film.

During that year, Acres toured the country giving lectures with projected accompaniment at photographic societies and in June of 1896 he was asked to give a programme of films at the first Royal Command Film Performance at Marlborough House - the residence of the Prince of Wales.

Acres’ film manufacture and processing became the primary focus of his activities and proved highly successful as the British Film Industry began to get established. However his inventive nature was still prominent and in 1898 he unveiled the Birtac - a piece of apparatus he hoped would popularise cinematography in the same was as George Eastman had popularised photography with the Kodak camera.

Unfortuanately for Acres, within weeks a rival 17.5 mm camera/projector was announced - the Biokam by the Warwick Trading Company. The Biokam benefitted from its cheapness - half the price of the Birtac, and heavy backing. Regardless of this, Birt Acres can still be creditted as inventing the first amateur cine camera.

Birt Acres remained in the film business until his death in 1918.