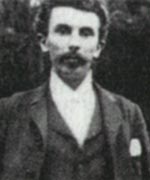 W.K.L (William Kennedy Laurie) Dickson was born in 1860 in Minihic-sur-Ranse, France to an English father and a mother from Scottish descent.

In February 1879 the Dickson family, William, his widowed mother and two sisters left France and moved to England. Once settled in England the nineteen year old Dickson wrote to Thomas Edison who, at that time, was working in Menlo Park in America. In his letter Dickson presented himself as, “...a friendless and fatherless boy” with “patience, perseverance, an ardent love of science and above all a firm reliance on God”. Dickson concluded his letter by asking for employment. Dickson received a brief refusal.

Three months later, the Dickson’s were on the move again, this time to the United States and four years after settling there William was finally given a job at the Edison Laboratories and quickly proved himself to be a valuable assistant.

In 1887, when Thomas Edison initially started thinking about moving pictures, Dickson was occupied with experimentation on a costly ore extraction process. The following year Edison set Dickson to work developing his ideas. Edison’s idea was centred around his sound capture device - the phonograph.

The early experimentations carried out in Edison’s laboratories show a determined effort to make this cylinder method succeed. Dickson placed orders for many interesting supplies - Magic Lantern plates, and plates from Eadweard Muybridge’s Animal Locomotion Experiments. In September of 1888 Dickson ordered a quantity of microphotographic lenses - clearly for use in his motion picture experiments.

Other ideas put forward by Edison to Dickson included the coating of the cylinder with emulsion but this proved difficult and Dickson sought other alternatives, travelling to New York to obtain some “daguerreotype experiment” supplies.

In November 1888 John Carbutt announced to colleagues in the field of photography announced his successful production of photographic quality celluloid, available in 20 x 50 inch sheets. The decision by Edison’s laboratory to order a dozen Carbutt film sheets the following June seemed to signify an end to the cylinder experiments but the Summer of 1889 saw serious experimentation on what was now being called the Kinetoscope.

On August 2nd 1889, Edison left Dickson to continue with the cylindrical moving picture machine and sailed to Europe where he met Jules Marey.

Returning to his laboratories on October 6th he found an addition to his premises - a new “Photographic Building” had been erected to accommodate Dickson’s experiments.

Despite stimulus from two events - the introduction to Marey’s roll film Chronophotographe and apparent competition from William Friese-Greene (who had described a machine camera for taking 10 photographs a second) no real attempt was made to prioritise the Kinetoscope experiments and much of the Summer of 1890 was spent by Dickson and Edison experimenting with the Ore Extraction process.

Despite the Friese-Greene threat and the new possibilities opened up by flexible film, cylinder experiments continued on to the bitter end. In Late October of 1890, Dickson’s hard work produced its first successful results. He was able to show his first motion pictures produced by the cylinder Kinetoscope. The viewed scenes, the so called “Monkeyshines” starred one of the laboratory workers dressing up and fooling around for the camera.

Results were clearly achieved by the cylinder machine as evidence still exists pertaining to the fact, but it was clearly a dead end. The moving pictures produced were only viewable using huge monocular magnification - under which the microscopic images would almost certainly appear grainy.

Work on the cylinder device ended late in 1890 and work began on a moving picture Kinetoscope using roll film. By May of 1891 Dickson had produced a working prototype, this followed with a camera and patent specifications for the Kinetograph camera and Kinetoscope viewer were filed on 24th August 1891.

Edison’s announcement that he would show films on his new Kinetoscope at Chicago’s World Columbian Exposition meant that a great deal of work was needed to fulfil the expected twenty five machines. Dickson identified the need for films to show in these machines and when Dickson perfected the Kinetograph Camera in October 1892, he set to work designing a studio to make these films.

Building work began on the studio in December in the grounds of Edison’s West Orange Laboratory. The studio was constructed of wood and tar paper with a removable roof and sat on circular tracks enabling rotation to trap the maximum amount of sunlight. The studio became known as the “Black Maria” due to its supposed similarities to the police wagons of the period.

Regrettably the twenty five Kinetoscopes promised for the Chicago Fair weren’t ready by its opening in May 1893.

Edison’s reputation as an inventor and businessman meant that Dickson was able to persuade major showbusiness figures to travel from New York to the Black Maria Studio to star in Edison films. Many vaudeville acts travelled to New Jersey, often waiving their fee including Eugene Sandlow - “The Strongest Man in the World”, and Ruth Dennis - “High Kicker”.

April the first 1894 saw the appointment of a new general manager of Edison’s Enterprises - William E. Glimore. Friction was soon generated between Dickson and Gilmore, Gilmore insisting that all copyrights held in Dickson’s name be changed to Edison.

The growing differences between Dickson and his employer was aggravated further when Edison put Dickson’s colleague, Charles Kayser, to work developing a projection apparatus for motion pictures. Edison had previously stated categorically that he had no interest in projecting moving pictures in favour of the current peephole method.

Outside of work, Dickson spent time with the Latham’s (Gray and Otway) as well as with engineer friend Henry Norton Marvin and his partner Herman Casler. With Marvin and Casler, Dickson discussed the idea of a simple alternative to the Kinetoscope.

Retaining the peepshow format Dickson’s idea involved an elaboration on the flick-book principle and on November 21 1894 Casler filed a patent application for this device under the name Mutoscope. The following March Casler demonstrated a camera - the Biograph to take “views” for the Mutoscope.

Around this time is recorded a confrontation between Dickson and William Gilmore, little is known about what exactly was said but it is believed Gilmore accused Dickson of being disloyal to Edison. Dickson, upset and angry that, after all his hard work his loyalty was called into question resigned from Edison’s Company on April 2nd 1895.

By early June in 1895, Casler’s camera was in operation and Dickson appears to have spent that summer at Canastota, New York, with Marvin and Casler and probably made some of the first mutoscope films.

Dickson was now firmly committed to the development of the Mutoscope, November 5th 1895 saw its patent issued and nine days later a application for a patent was made for a handheld mutoscope. November also saw a mutoscope adapted with a mirror device to project motion pictures and soon after the group perfected a through the film projector which they called the Biograph.

The American Mutoscope company was established on December 27th 1895 - the partners listed as Dickson, Marvin, Casler and Elias Hoopman. They set up premises at 841 Broadway, in New York.

Dickson’s knowledge of the European marketplace made him an ideal candidate for manager of the Mutoscope and Biograph Syndicate’s London Office, which he became as the century drew to a close.