The Lumière brothers, Auguste and Louis - Pioneer of Cinema 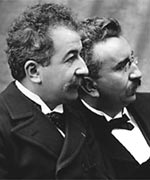 The Lumière brothers, Auguste and Louis, were sons of well known Lyons based portrait painter Antoine Lumière. They were both technically minded and excelled in science subjects and were sent to Technical School.

During his experimentation, Louis discovered a process which assisted the development of photography. Louis developed a new 'dry plate' process in 1881 at the age of seventeen, it became known as the 'Etiquette Bleue' process and gave his father’s business a welcome boost, and a factory was built soon after to manufacture the plates in the Monplaisir quarter of the Lyons Suburbs.

By 1894 the Lumières were producing around 15,000,000 plates a year. Antoine, by now a successful and well known businessman, was invited to a demonstration of Edison’s Peephole Kinetoscope in Paris. He was excited by what he saw and returned to Lyons. He presented his son Louis with a piece of Kinetoscope film, given to him by one of Edison’s concessionaires and said, "This is what you have to make, because Edison sells this at crazy prices and the concessionaires are trying to make films here in France to have them cheaper".

The brothers worked through the Winter of 1894, Auguste making the first experiments. Their aim was to overcome the limitations and problems, as they saw them, of Edison’s peephole Kinetoscope. They identified two main problems with Edison’s device: firstly its bulk - the Kinetograph - the camera, was a colossal piece of machinery and its weight and size resigned it to the studio. Secondly - the nature of the kinetoscope - the viewer, meant that only one person could experience the films at a time.

By early 1895, the brothers had invented their own device combining camera with printer and projector and called it the Cinématographe. Patenting it on February 13th 1895, the Cinématographe was much smaller than Edison’s Kinetograph, was lightweight (around five kilograms), and was hand cranked. The Lumières used a film speed of 16 frames per second, much slower compared with Edison’s 48 fps - this meant that less film was used an also the clatter and grinding associated with Edison’s device was reduced.

Perhaps most important was Louis’s decision to incorporate the principle of intermittent movement using a device similar to that found in sewing machines. This was something Edison had rejected as he struggled to perfect projection using continuous movement. The brothers kept their new invention a closely guarded secret with Auguste organising private screenings to invited guest only.

The first of such screenings occurred on 22nd March 1895 at 44 Rue de Rennes in Paris at an industrial meeting where a film especially for the occasion, Workers leaving the Lumière factory, was shown. Unlike Edison, the Lumière Brothers were quick to patent the Cinématographe outside of their native France, applying for an English Patent on April 18th 1895. The brothers continued to show their invention privately, again on June 10th to photographers in Lyon.

Such screenings generated much discussion and widespread excitement surrounding this new technology - in preparation for their first public screening on 28th December at the Grand Cafe on Paris’s Boulevard de Capuchines. The programme of films on show that day was as follows:

Louis photographed the world around him and some of his first films were 'actuality' films, like the workers leaving the factory. The brothers began to open theatres to show their films (which became known as cinemas). In the first four months of 1896 they had opened Cinématographe theatres in London, Brussels, Belgium and New York.

Their catalogues grew from 358 titles in 1897 to 1000 in 1898 to 2113 in 1903; although out of the 2113 titles in the 1903 catalogue, less than 50 were the brothers. The rest were taken by other operators like Promio, Doublier and Mesguich. In 1900 the brothers projected a film on a huge 99 x 79 foot screen at the Paris Exposition, after which they decided to curtail their film exhibitions and devote their time to the manufacture and sale of their inventions.

In 1907 they produced the first practical colour photography process, the Autochrome Plate.

Antoine, after the initial cinematic explosion, returned to his art and continued to paint until his death in 1895.

Thoughts on "The Lumière brothers, Auguste and Louis - Pioneer of Cinema"