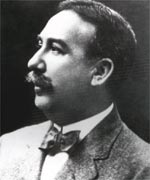 Edwin S. Porter joined the Vitascope Marketing Company in 1895 where his experience with electrical engineering was called into use.

Whilst at Vitascope, Porter was central in the organisation of the first projected movie show in New York on the 23rd April 1896. He continued to use his engineering skills in the laboratory at Edison’s Manufacturing Company but left to become a freelance projectionist at the Eden Musee Theatre in 1898.

Whilst working as a projectionist, one of Porter’s many duties included the illegal duplication of Méliès films. He would take apart one act reels and combine several of these into a fifteen minute programme.

In addition, he attempted to create his own camera and projector but his efforts were in vain and in 1900 he returned to Edison’s Company not in an engineering capacity but as a producer and director at Edison’s East 21st Street Skylight studio.

A fan of the films of Georges Méliès, Porter tried to emulate the trick photography which Méliès had introduced to the world and had proved incredibly successful, in films such as 'The Finish of Bridget McKeen' (1901) and 'Jack and the Beanstalk' (1902). Porter was also one of the first directors to shoot at night in his 'Pan-American Exposition by Night'.

Porter’s skill with editing and methods of projection were used to great effect in some of his earliest films. He combined documentary footage with his own footage in films like 'The Execution of Czoyosz' (which he made with actor and set painter George S. Fleming); in 'Life of an American Fireman' he adopted a documentary style of filmmaking.

'Life of an American Fireman' combined stock actuality footage of fires, firemen and fire engines with dramatised scenes which Porter shot, this juxtaposition added tension and release to the film making it truly dramatic in contemporary setting, unlike Méliès whose filmatic drama was derived from his films’ fantasy settings.

Porter was convinced, from the audience reaction that he had discovered a new way of telling stories and developed his ideas the following year with the release of 'The Great Train Robbery', perhaps the most influential film of that decade.

'The Great Train Robbery' benefited from a strong storyline, well composed, sophisticated camera work and an excellent climax, joined together by Porter’s excellent use of editing.

Although it was not the first 'Western', 'The Great Train Robbery' was the first Epic Western, which boasted a cast of forty actors working to an actual script.

During his time at Edison, he made many films for the company, in fact he was the mainstay of their film production for over five years. He left in 1909 and took senior production posts with a number of new independent companies.

Six years later, In 1915 Porter returned to his firs enthusiasm - projectors and remained involved with projection for the rest of his working life.