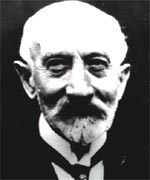 In 1884, Méliès continued his studies abroad, in London at the request of his parents - they insisted he learn English after which they intended him to work at his father’s footwear business. While in London, he developed a keen interest in stage conjury after witnessing the work of Maskelyne and Cooke.

On his return to Paris he worked at his father’s factory and took over as manager when his father retired. His position meant that he was able to raise enough money to buy the famous Theatre Robert Houdin when it was put up for sale in 1888.

From that point on Méliès worked full time as a theatrical showman whose performances revolved around magic and illusionist techniques which he studied while in London as well as working on his own tricks.

When the Lumière brothers unveiled their Cinématographe to the public on December 28 1895 Méliès was a member of the audience. What he witnessed clearly had a profound effect upon him. After the show he approached the Lumière Brothers with a view to buying their machine - they turned him down.

Determined to investigate moving pictures, Méliès sought out Robert Paul in London and viewed his camera - projector building his own, soon afterwards. He was able to present his first film screening on April 4th 1896.

Méliès began by screening other peoples films - mainly those made for the Kinetoscope but within months he was making and showing his own work, his first films being one reel, one shot views lasting about a minute.

Méliès’ principle contribution to cinema was the combination of traditional theatrical elements to motion pictures - he sought to present spectacles of a kind not possible in live theatre.

In the Autumn of 1896, an event occurred which has since passed into film folklore and changed the way Méliès looked at filmmaking. Whilst filming a simple street scene, Méliès camera jammed and it took him a few seconds to rectify the problem. Thinking no more about the incident, Méliès processed the film and was struck by the effect such a incident had on the scene - objects suddenly appeared, disappeared or were transformed into other objects.

Méliès discovered from this incident that cinema had the capacity for manipulating and distorting time and space. He expanded upon his initial ideas and devised some complex special effects.

Méliès tackled a wide range of subjects as well as the fantasy films usually associated with him, including advertising films and serious dramas. He was also one of the first filmmakers to present nudity on screen with “Apres le Bal”.

Faced with a shrinking market once the novelty of his films began to wear off, Méliès abandoned film production in 1912. In 1915 he was forced to turn his innovative studio into a Variety Theatre and resumed his pre-film career as a Showman.

In 1923 he was declared bankrupt and his beloved Theatre Robert Houdin was demolished. Méliès almost disappeared into obscurity until the late 1920’s when his substantial contribution to cinema was recognised by the French and he was presented with the Legion of Honour and given a rent free apartment where he spent the remaining years of his life.

Georges Méliès died in 1938 after making over five hundred films in total - financing, directing, photographing and starring in nearly every one.