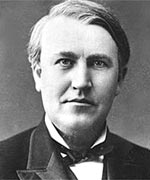 Regarded as the “Wizard of Menlo Park”, Thomas Alva Edison was born in Milan, Ohio on February 11th 1847. When he was seven, the Edison family moved to Port Huron, Michigan where the young Tom Edison set up his first chemical laboratory in the basement of their large house.?

He attended school for only three months and at the age of twelve began selling newspapers on the Grand Trunk railway devoting every second of his spare time to experimentation with printing presses and electrical and mechanical apparatus.

In 1862 at the age of fifteen Edison published his own weekly paper - The Grand Trunk Herald - printing it in a freight car that served as a laboratory. Edison was taught the new science of Telegraphy out of gratitude from a Station Agent whose son Edison had saved by snatching him from the path of a moving train. The skills he learnt in Telegraphy afforded him a job as a Telegraph operator which took him across the country from Stratford in Canada to Adrian, Michigan; Fort Wayne and Boston.

It was while working as a telegraph operator that Edison made his first invention - a telegraphic repeating instrument which enabled messages to be transmitted automatically over a second line without the presence of an operator.

Edison settled briefly in Boston and secured employment; he, again devoted all of his spare time to his research and experimentation during which time he invented a vote recorder which although it had its merits was not sufficiently practical to warrant its adoption. At the age of 21 he travelled, almost penniless to New York City and obtains employment at the Gold and Stock Telegraph Company after fixing a broken down machine. Earning $300 a month he greatly improved their apparatus and service, again spending his spare time devoted to working of new inventions.

Among his many inventions during his employment in New York was the “Universal Stock Ticker” and generated around $40,000 from the sale of this any many other inventions. With this new-found wealth Edison moved to Newark and opened a manufacturing shop there making stock tickers.

He remained in Newark until 1875 when, at the age of 29 he moved to Menlo Park in New Jersey and the following year established a laboratory there.

In his new premises, Edison carried out some of most important work, he devised an automatic telegraph system that made possible a greater speed and range of transmission. He developed machines that made it possible to transmit several telegraphic messages on one line increasing the usefulness of existing telegraph lines. Edison also invented a Carbon Telephone Transmitter which proved important in the development of the telephone - something which had recently been invented by American Physicist and Inventor Alexander Graham Bell. In 1877, Edison recorded sound. His phonograph employed a tinfoil cylinder onto which sound was mechanically etched.

He developed this idea later in his career using wax discs instead of tinfoil cylinders. Two years later, Edison exhibited what is often regarded as his greatest invention - the Incandescent electric light bulb. In the years that followed Edison occupied himself with the improvement of the light-bulbs and the dynamos for generating the necessary electric current. Such was his research in this area that on September 4th 1882 Edison started operation of the world’s first large central electric power station on Pearl Street in New York.

In the spring of 1883, Edison employed W.K.L Dickson as his assistant. 1887 saw another move for Edison, this time from Menlo Park to West Orange, New Jersey.On this new site, Edison constructed a large laboratory for his experimentation and research. Motivated by the work of Marey and Muybridge Edison wrote on October 8th 1888 that, “I am experimenting upon an instrument which does for the eye what the phonograph does for the ear.” Most of the experimentation and research was carried out by Edison’s assistant, Dickson, with early experiments employing techniques developed with the phonograph. These involved arranging rows of tiny photographs on the outside of a cylinder with a light, or igniting sparks inside. Experiments using this idea as a starting point continued for some years.

On August 2nd 1889 Edison sailed to Europe and met with Jules Marey and witnessed the results achieved by Marey’s roll-film Chronophotographe. Edison returned to America with his faith in the cylinder’s shaken although he continued to experiment with this format. In October of 1890, one of Edison’s laboratory workers Sacco Albanese was the subject for the first film to employ the cylinder method. The so called “Monkeyshines” clearly displayed the limitations of this method of presentation as viewing required huge monocular magnification, and even then the images would appear impossibly grainy. As a result, the cylinder method was abandoned in favour of film.

With Dickson leading the experimentation and research the Kinetoscope was developed - a peepshow device which required viewers to peer into the top of a large cabinet where they would be treated to a minute or so of moving pictures. The first Kinetoscope prototype was ready by May 20th 1891 and was demonstrated to a Convention of the National Federation of Women’s Clubs invited to the laboratory by Edison’s wife. In June of 1892 Edison announced his intention to included his Kinetoscope in the World’s Columbian Exhibition in Chicago the following year.

Realising that a necessity for the Exhibition’s Kinetoscopes would be films to view, Dickson perfected a working camera in October of 1892 and December saw the erection of a studio in the grounds of Edison’s Laboratory which became known as the Black Maria, thanks largely to its resemblance to the police vans of the time. The first official public demonstration of the Kinetoscope was on May 9th 1893 at the Brooklyn Institute of Art’s and Sciences. The audience at this demonstration were lined up and filed past the machine to view a Blacksmith Scene.

Despite the best efforts of Edison’s company, the Kinetoscopes were not ready in time for the Exhibition in Chicago.

One of the first films made for the Kinetoscope and copyrighted by Dickson was the now legendary “Record of a Sneeze” made in early January 1894. The subject of this film was one Fred Ott and each individual frame showing his antics were recorded on paper with its own number and sent, on January 7th to the Library of Congress for copyright. The desire to meet Edison and appear in his new moving pictures was great and this meant he was able to attract popular stage personalities to appear in short films - generally based on Vaudeville acts. Each of these events was usually a staged event - even the early films such as the Blacksmith Scene were recorded in the studio requiring an Anvil to be facilitated - the workers from Edison’s machine room who appear in this film, can be seen pausing from their hammering and pass around a bottle of drink.

The Latham’s saw the possibilities in recording prize-fights which were against the law in many states and such fights became popular with Kinetoscope viewers. The first foreign Kinetoscope Parlour opened on October 7th 1894 at 70 Oxford Street in London but by the end of 1894 the Kinetoscope craze was dying down and Edison’s failure to patent the Kinetoscope properly meant his developments were much copied. In December of 1895, Thomas Armat demonstrated his projecting Phantoscope to entrepreneurs Raff and Gammon, who in turn approached Edison with a view to developing.

Edison, who had seen his peephole Kinetoscope losing popularity to other motion picture projecting devices such as the Lumière brother’s Cinématographe agreed renaming the Phantoscope the Vitascope and marketing under the banner “Edison’s Vitascope”. At a demonstration of the Vitascope Edison played the role of its inventor convincingly well.

During his career, Edison patented over a thousand inventions and received many notable awards - in 1928 he received the Congressional Gold Medal for “development and application of inventions that have revolutionised civilisation in the last century.”